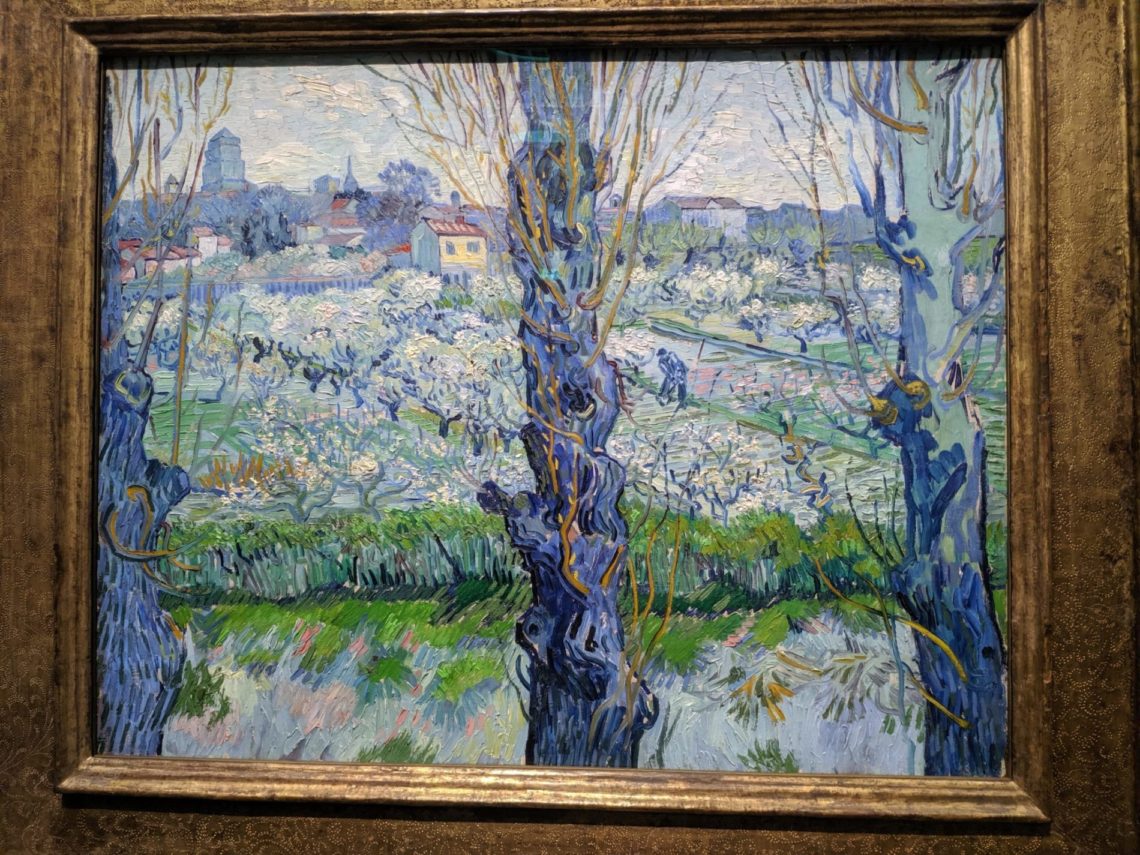 Based on the trailblazing exhibition entitled “Making Van Gogh” on view at the Städel Museum through February 16, 2020, we feel it is justified to refer to Vincent van Gogh as the “Father of Expressionism.” Without a doubt, this spectacular presentation of 50 paintings (and additional works on paper) by van Gogh goes even further, making a plausible argument that the Dutchman whose art career lasted no more than one decade should be recognized as a most influential figure in the development of German modern art.

The city of Frankfurt is often described in unflattering terms. “Frommer’s Germany,” the popular travel guide, states: “Many travelers get their first introduction to Germany in this city because Frankfurt airport serves as the country’s main international hub. And that’s a shame, because although there are cultural and financial riches here, the city itself is not particularly memorable.”

View of the river Main from Frankfurt’s Städel Museum.

We respectfully disagree with Frommer’s, and with other negative media outlets that give Frankfurt a bad name. “Making Van Gogh” ranks among the best art shows presented in Europe at this time and the Städel, perfectly situated on the banks of the river Main alongside a row of “memorable” poplar trees, is historically-speaking the most fitting institution to host such a groundbreaking exhibit.

Left: Poplar trees in front of the Städel Museum. Right: van Gogh’s “The Parsonage Garden at Neunen in Winter.”

This remarkable show begins as one would expect with two typical works of art created in 1884 by Vincent van Gogh: “The Parsonage Garden at Neunen in Winter” from the Szepmuveszeti Muzeum in Budapest, and “Potato Planting” from the von der Heydt-Museum, Wuppertal. By February 1886, as you know, Vincent left present-day Holland and Belgium to move into the Paris apartment of his brother, Theo. Since Theo worked as an art dealer, Vincent was quickly introduced to younger members of various avant-garde movements such as the Pointillists led by Georges Seurat and Paul Signac, the Cloisonnists (Émile Bernard, Paul Sérusier and Paul Gauguin), the established Impressionist painters Camille Pissarro and Armand Guillaumin, and notables such as Henri de Toulouse-Lautrec who became Vincent’s good friend.

During his transformative two years in Paris, van Gogh exchanged his darkly brooding palette for more experimental styles. Though customary for aspiring artists to become the pupil of a successful painter, van Gogh learned primarily from the other artists he met and befriended. For some painters from the vanguard, like Émile Bernard, van Gogh became a father figure. “When he emerged from the back shop,” Bernard wrote, “with his high, broad forehead, he was so striking I was almost frightened; but we soon made friends.” Van Gogh found Parisian life hectic and, at the beginning of 1888, headed south to Arles. Though he missed his intellectual contact with artistic friends, van Gogh’s time in the French capital and then in the South led to a unique style characterized by strong outlines, portraits with psychological depth, painterly brushstrokes, and bold, expressive colors. At this point, “Making Van Gogh” takes the viewer from the familiar van Gogh experience of showing Vincent’s paintings exclusively among French art to a more original visual journey: the exploration of Vincent van Gogh’s legacy and his impact on German Expressionism and Modernism.

Members of Die Brücke (The Bridge), an association of painters formed in 1905 in Dresden, were fascinated by van Gogh’s motifs, which they adopted, and felt Vincent’s technique of applying thick layers of pure hues directly from the tube onto the canvas empowered each artist with direct access to his subject matter. In the 1880s, when van Gogh taught himself to paint, art academies instructed painters to never leave visible brushstrokes on the canvas. Just as van Gogh had broken the conventions of his day, the standards of painting taught in German academies were rejected by members of Die Brücke: Karl Schmidt-Rottluff, Ernst Ludwig Kirchner, Erich Heckel, Max Pechstein, Emil Nolde and Otto Mueller.

Having seen Vincent’s original paintings in a Dresden exhibition, members of Die Brücke felt liberated to simplify their forms and apply strong, contrasting colors to their canvases. The founding members were so inspired by van Gogh that Emil Nolde jokingly suggested that they should call themselves “van Goghiana” instead of Die Brücke.

In 1908, the Städel became one of the first museums to purchase works by van Gogh, acquiring two pieces. By 1911, the painters in Die Brücke had gone their individual ways, but the work of van Gogh continued to cause a sensation beyond Dresden and Berlin, and Vincent’s 1890 “Portrait of Dr. Gachet” entered the Städel’s collection. 20 years after his death, van Gogh represented both an inspiration for a new generation of young German artists such as Gabriele Münter (whose portraits presented introspective figures within bold outlines, like van Gogh’s) and a revelation for immigrant painters entering the German art world.

Emigrants to Germany, including Marianne von Werefkin, Alexej von Jawlensky and Wassily Kandinsky from Russia, worked with Münter and other German artists to form Der Blaue Reiter (The Blue Rider) group, active in Munich from 1911 – 1914. Jawlensky and Kandinsky found inspiration in Vincent’s frequent use of shorter and longer brushstrokes and in his emphasis on direction in his brushwork.

This exhibition unites 50 van Gogh paintings with 70 works by artists who lived in Germany during the first half of the 20th Century. “Vegetable Fields” by August Macke, a member of Der Blaue Reiter, shows pathways intersecting diagonally – a motif used by Vincent in his landscapes created in Arles and Auvers-sur-Oise.

Just as Pechstein, Nolde, Heckel and Schmidt-Rottluff in Der Brücke had admired the well-ordered underlying structure in van Gogh’s body of work, and his methodical pastose application of paint, we clearly see how artists from Der Blaue Reiter such as Macke, Münter, Kandinsky and Franz Marc learned from Vincent’s rhythmic distribution of color.

Additional fine works by Paula Modersohn-Becker, Otto Dix and Max Beckmann attest to the profound influence of van Gogh, who died on July 29, 1890. In Germany, his paintings and life story captivated long-lasting public interest and, by 1914, about 150 of his works were in public and private German art collections. Young painters in France and Germany looked up to Vincent. In a letter dated August 2, 1890, Émile Bernard wrote, “Our dear friend Vincent died four days ago. He finally died on Monday evening, still smoking his pipe which he refused to let go of, explaining that his suicide had been absolutely deliberate and that he had done it in complete lucidity. You know how much I loved him and you can imagine how much I wept. “

We urge you to view “Making Van Gogh” in Frankfurt. With van Gogh’s “Self Portrait” on loan from The Art Institute of Chicago, numerous paintings from the Kröller-Müller Museum in Otterlo, and fine art from the best collections in Germany, this is an especially rare opportunity to see the significance of van Gogh in the rich context of German art history.

A painting from the Städel Museum paid a visit to Paris.

As a postscript to this article, please note that a beautiful 1872 oil painting by Edgar Degas from the collection of the Städel Museum was on view in Paris at The Musée d’Orsay during the presentation of “Degas and the Opera” from September 24, 2019 through January 19, 2020. You may view additional images regarding the Degas exhibition in our article entitled “Parisian Portraits — Our Review of Four Exhibitions in Paris.”

Paintings from the Art Institute of Chicago (left) & Moscow’s Pushkin State Museum (center), and “Orchestra Musicians” from the Städel (right) were exhibited at the Musée d’Orsay.

The Städel is presenting 60 pieces of art by Rembrandt van Rijn plus 80 additional works by his contemporaries from October 6, 2021 to January 30, 2022 for the exhibition “REMBRANDT IN AMSTERDAM: Creativity and Competition.” 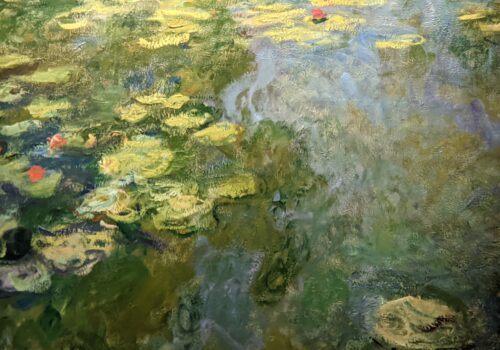 A Unique & Fabulous Pilgrimage to the Marmottan in Paris 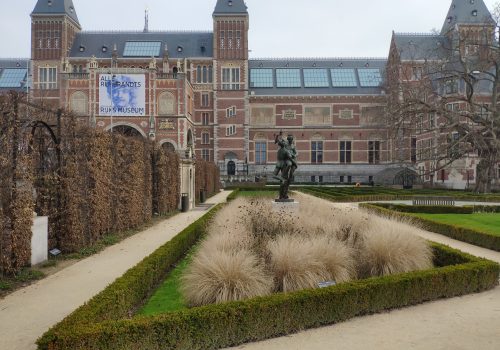 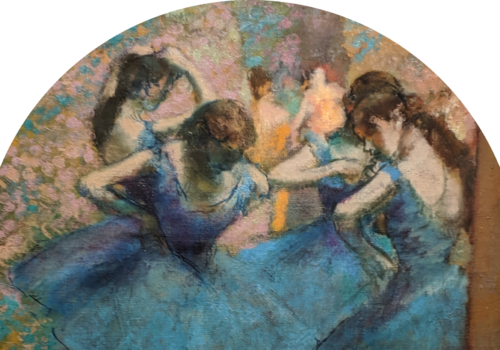 Previous Exhibitions at the Musée d’Orsay